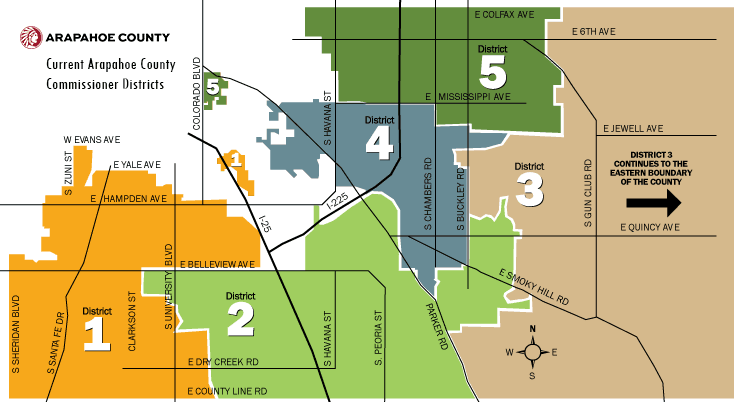 Redistricting is a nonpartisan process to redraw county commissioner district boundaries so they accurately reflect population changes in Colorado counties.

Under Colorado Revised Statute (30-10-306.7) boundaries for county commissioner districts must be redrawn every 10 years based on data from the most recent United States Census.

Due to a nationwide delay in states receiving 2020 United States Census data, the Colorado State Legislature passed legislation to delay county commissioner redistricting until 2023, to allow time to analyze data and adequately prepare. The new districts will be effective in the 2024 election cycle.

Next, the Board of County Commissioners will listen to public input on the draft maps before approving a final redistricting plan.

Many safeguards apply to the process to ensure it is done in a fair, transparent manner. As they draw proposed maps and decide upon a final map to adopt, the Citizens Redistricting Advisory Committee and the Board of County Commissioners will consider specific criteria, such as:

All working meetings of the Citizens Redistricting Advisory Committee are open meetings, the public may attend in person or virtually. Arapahoe County residents may submit comments about the redistricting process at these meetings, by phone during the meetings, or via the digital comment form linked below at any time. Once the Advisory Committee creates drafts of new district maps this spring, the Committee will schedule hearings in each commissioner district specifically to absorb public feedback on the proposed maps.

The advisory committee comprises three members each from the Democratic and Republican parties and three politically unaffiliated members. Three alternates were also appointed to replace any member who cannot complete the process.